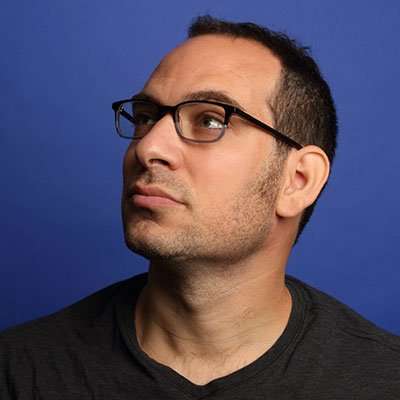 Our guest today is Jonathan Mann, who holds the Guinness World Record for Most Consecutive Days Writing a Song. He began his Song-a-Day project on January 1, 2009, and the upcoming New Year’s Day will mark an even ten years of writing, and recording, and publishing online, one new song every day.

His story is an amazing and inspiring example of how showing up regularly, creating content and sharing it with the world, can open up opportunities that we have not even imagined.

In our discussion, Jonathan shares what happened on the day one of his songs was used to open a Steve Jobs press conference, and how that breakthrough moment led to him becoming the Conference Troubadour.

As the Conference Troubadour, Jonathan is hired to attend conferences. He listens to the sessions over the course of the day and composes a song that includes the key messages of the event, and he closes the conference by singing the song with the attendees, since he always includes a chorus that he teaches to the audience.

About 90% of songs on the radio are about love, as if that was the only topic worth singing about. Jonathan’s songs are incredibly inventive and cover everything else.  He was attended conferences, and written songs about, topics as diverse as the National Apartment Association, medical case management, and internal company communications.

One of my favorites of the songs he has posted to Youtube is the iOS Autocomplete Song, in which the entire lyrics are composed by the autocomplete function on an iPhone.

You can learn more about Jonathan on his website: https://www.jonathanmann.net/

There you can reach out to him about attending your next conference, or for a person or a business commission. In addition to his conference work he will compose a song to celebrate a birthday, anniversary, or other special event, or a song about your company.

In this episode we have a few samples of his work, and I hope you enjoy the discussion as much as I did.