Futurist Trond Undheim, former director of the MIT Startup Exchange, wrote 17 hours per day for six weeks in February and March this year, producing the 450-page Pandemic Aftermath: How Coronavirus Changes Global Society, which was published in May.

Trond spoke to me about his work as a futurist and the ideas in this book in Episode 315 of Unleashed.

Jobs to be Done

Umbrex member Steve Wunker worked closely for over five years with the late HBS professor Clayton Christensen, who first popularized the “jobs to be done” approach to innovation.

Steve discusses how to apply the “jobs to be done” methodology in Episode 309 of Unleashed.

More info on jobs to be done including a quick reference guide on the website of Steve’s firm, New Market Advisors.

The Power of the Dog

I spent the past couple weeks reading the three-book Power of the Dog series by Don Winslow – a gripping tale of the Mexican drug trade told from multiple perspectives (e.g., a DEA agent, various drug kingpins, a mistress, a boy who escapes from Guatemala on the train through Mexico, addicts, undercover cop in the U.S., journalists in Juarez.)

Deeply researched, and provides insights hard to get from traditional non-fiction reporting.

Powering Prosperity: A Citizen’s Guide to Shaping the 21st Century

Umbrex member Indranil Ghosh is the author of the recently published Powering Prosperity: A Citizen’s Guide to Shaping the 21st Century.

In Episode 289 of Unleashed, Indranil discusses the key themes of the book: inclusive governance, investing with purposes, and empowering local communities.

Umbrex is pleased to welcome Mayowa Ubebe with Cardinal Cornerstone. Mayowa spent 2 years with McKinsey & Company as an Associate working on strategy development and implementation projects across across the public, private and third sectors. She was based in the Lagos office with wide-reaching experience working with global clients in the consumer, financial services and energy industries, national governments and multi-lateral development/donor organisations.

Prior to McKinsey, Mayowa had a 6-year career in the energy industry managing offshore EPC projects at ExxonMobil and performing hands-on wireline oilfield services as an Internationally-mobile Field Engineer with Schlumberger in Europe, Asia and Africa.

Mayowa currently lives in London, UK with her husband and son. She enjoys blogging and is passionate about mentoring female high school students in the developing world. She is available to collaborate on strategy development or implementation projects in any industry.

Congratulations to Umbrex member Robbie Kellman Baxter on the release of her second book, The Forever Transaction: How to Build a Subscription Model So Compelling, Your Customers Will Never Want to Leave. Robbie discusses the book with me in Episode 288 of Unleashed.

Robbie’s first book, The Membership Economy: Find Your Superusers, Master the Forever Transaction & Build Recurring Revenue, was named a top 10 marketing book of all time by BookAuthority, and we discussed that one on Episode 6.

The Years of Lyndon Johnson: Means of Ascent

Better than anything I’ve ever read on showing how power actually works in the U.S. government, and what happens behind the scenes. (Big investment – took me a year, but worth it.)

Highly recommended: The Years of Lyndon Johnson: Means of Ascent 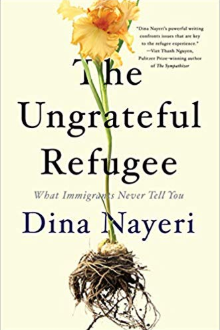 Back in 2001, Dina Nayeri was in my class of Business Analysts in the New York office of McKinsey. Later, after getting an MBA at Harvard, she turned to writing and has two published novels.

Now she has produced her first non-fiction book, the story of how she left Iran with her brother and mother in 1989 (leaving their father behind.) Their story is intertwined with the stories of more recent refugees, based on reporting Dina did at a camp in Greece.

I read The Ungrateful Refugee in one evening over the holidays: highly recommended.

Stillness is the Key

Ryan Holiday encourages us to find stillness in our lives: “Stillness is what aims the archer’s arrow. It inspires new ideas. It sharpens perspective and illuminates connections.”

Stillness is the Key.

I had seen the movie, but this book is extraordinary. FBI agent Joe Pistone infiltrated the mafia and stayed undercover for six years.

A thrilling story and powerful meditation on what it takes to build trust.

Codes of the Underworld 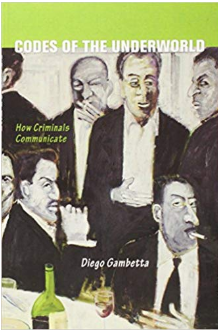 How do criminals (notoriously an untrustworthy population) convince other criminals to trust them?

Why do real-life criminals adopt language and symbols from gangster movies?

Why is violence more common in prisons with a high inmate turnover?

Absolutely fascinating throughout, and relevant even for those not considering a career switch to the underworld. One key theme: expanding the idea of communication beyond language to include actions, particularly “honest signals,” that is, actions which are relatively cheap for an honest communicator to send and expensive for a dishonest communicator.

Highly recommended: Codes of the Underworld: How Criminals Communicate, by Diego Gambetta

I aim to pursue life with a five decade time horizon, and I enjoyed Simon Sinek’s argument in favor of playing The Infinite Game.

“There is no such thing as coming in first in marriage or friendship.”

“There is no such thing as winning education.”

“No matter how successful we are in life, when we die, none of us will be declared the winner of life.”

What You Do Is Who You Are

In What You Do Is Who You Are: How to Create Your Business Culture, Ben Horowitz, cofounder of legendary VC firm Andreessen Horowitz, explains that “culture is how your company makes decisions when you are not there.”

I like that he draws lessons from a more diverse set of leaders than the typical business book, including Toussaint Louverture, the leader of the only successful slave revolt in history, and Shake Senghor, leader of a prison gang in Michigan.

Her latest book, Keep It Moving: Lessons for the Rest of Your Life, provides an argument for and tips on remaining physically active as we age.

Her previous book, The Creative Habit: Learn It and Use It for Life, is one of my all-time favorites.

onomist Bryan Caplan teams with illustrator Zach Weinersmith to make the argument for open borders and answer the common arguments against open borders.

Whatever your views on immigration, this book is highly recommended. Compelling use of the graphic novel format and a model for other non-fiction seeking to reach a broad audience.

I liked this quote from Amy Chua: “Do you know what a foreign accent is? It’s a sign of bravery.”

Open Borders: The Science and Ethics of Immigration

New synthetic addictive drugs are being invented in China faster than authorities can outlaw the drugs.

Sophisticated users are buying these drugs over the Internet and having them shipped BY MAIL from China.

Fentanyl and its analogues are more addictive than existing drugs derived from natural substances, and can kill in insanely small amounts.

Terrifying view of the unfolding opioid crisis and the future of drug abuse.

The author of Fentanyl, Inc., Ben Westhoff, is the guest on a recent episode of the podcast Conversations with Tyler.

The Things You Can See Only When You Slow Down

Came across this wonderful book by Buddhist monk Haemin Sunim at the train station bookstore at Amsterdam Centraal. Three million copies have been sold (in the original Korean) and what a joy that it is now available in English.

“Would you like to make your child happy?
Then get off work a little early today.
Wait for your child in front of school.
Horse around together on the playground.
Let your child choose where to go for dinner.
And shower your child with loving attention.
On your way home, pick up ice cream for the family.

Your child will remember this day forever.”

Esther Duflo, Abhijit V. Banerjee, and Michael Kremer won the Nobel Price in Economics this week for their experimental approach to figuring out what interventions actually work to alleviate povery.

Poor Economics: A Radical Rethinking of the Way to Fight Global Poverty, by Duflo and Banerjee, is a highly engaging overview of the research – with many counter-intuitive results.

As you may have already heard this week, Esther Duflo is the youngest recipient and only the second women to receive the Economics Nobel.

“Fascist politicians justify their ideas by breaking down a common sense of history in creating a mythic past to support their vision for the present. They rewrite the population’s shared understanding of reality by twisting the language of ideals through propaganda and promoting anti-intellecualism, attacking universities and educational systems that might challenge their ideas. Eventually, with these techniques, fascist politics creates a state of unreality, in which conspiracy theories and fake news replace reasoned debate.”

From How Fascism Works: The Politics of Us and Them, by Jason Stanley

The Years That Matter Most

In The Years That Matter Most: How College Makes or Breaks Us, Paul Tough explores “how the system works and whom it works for.”

As an appetizer, check out “Legacy and Athlete Preferences at Harvard” by Arcidiacono, Kinsler, and Ransom.  “Our model of admissions shows that roughly three quarters of white ALDC admits would have been rejected if they had been treated as white non-ALDCs.” [ALDC = athletes, legacies, dean’s interest list {big donors} and children of faculty.]

How to Hide an Empire

They didn’t cover this in my high school history classes: How to Hide an Empire: A History of the Greater United States by Daniel Immerwahr tells the story of all the U.S. territories, islands, atolls, archipelagos, and the other miscellaneous possessions.

ith Grisel, the author of Never Enough: The Neuroscience and Experience of Addiction, has a PhD in neuroscience…. and from the age of 13 to 22 she was a heavy user of alcohol, marijuana, cocaine, opioids, LSD, barbituates, meth, and every other drug she could lay her hands on (she’s been clean for three decades.) Fascinating throughout.

“Opiate tolerance is mind-boggingly robust. Addicts can administer up to 150 times the dose that would be lethal to naive users, and, even so, just feel ‘right’ but not really high.”

Indistractable: How to Control Your Attention and Choose Your Life

The ability to control your own attention may be the master skill for the 21st century, and in Indistractable, Nir Eyal provides a framework – based on science – to regain that control, namely:

The Rise and Fall of American Growth

In The Rise and Fall of American Growth: The U.S. Standard of Living since the Civil War, Robert Gordon argues that the dramatic growth rate in the American economy in the “special century” from 1870 to 1970 can not be repeated, because, basically, we’ve already made the major improvements in the standard of living that can be made.

Are Your Goals an...